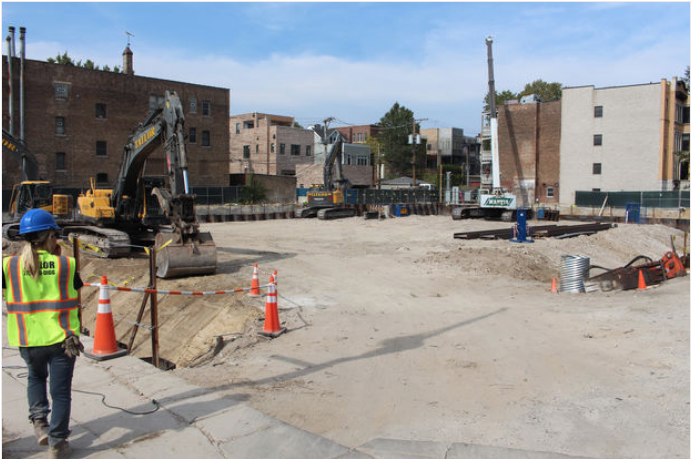 LINCOLN PARK — On the heels of launching the central part of the ambitious Lincoln Common development, construction crews have now broken ground on the Belmont Village senior center that will be part of the project.

Groundbreaking began last week on Belmont Village, which will replace the old Nellie Black building at 700 W. Fullerton Ave., just across the street from the Lincoln Common development on the triangular lot formerly occupied by Children's Memorial Hospital.

Belmont Village Senior Living has concentrated on the Chicago area since being founded 20 years ago, but this will be its first senior center within the city limits.

"There's a huge need" for senior housing in Chicago, said Belmont Village founder and Chief Executive Officer Patricia Will. "We can't think of a better place for housing and care for elderly seniors in an urban environment."

It's been a long time coming. According to Will, Belmont Village got in touch with Lincoln Common developer Dan McCaffery late in 2011 to see if it could join in the project, and McCaffery immediately embraced the idea.

"We've been at the table with this project from the beginning and have been made to feel very welcome by the city," Will said.

"We're excited to welcome Belmont Village to our community, and pleased they chose this location as their entry to the Chicago market," Smith said in a prepared statement. "Upon completion, the construction of these high-quality, market-rate assisted-living and memory-care units will allow seniors to continue to enjoy the comforts of the Lincoln Park community."

Will said it fit with McCaffery's idea to "create a vibrant community within a community," and Belmont Village welcomed "extending that to seniors."

Built in 1932, Nellie Black served as a dormitory for nurses and interns as part of the hospital campus. Preservationists fought to retain the building, along with the Martha Wilson Memorial Pavilion across the street, but it wasn't feasible.

"The building had a lot of asbestos in it," Will said. "It was in a fair state of deterioration."

But Belmont Village has been designed to resemble Nellie Black, with some of the original architectural elements salvaged to be reused in the new building to "respect the architectural history of the neighborhood," Will said.

Like the greater Lincoln Common development, which will feature 94,000 square feet of retail space, 538 apartments, 40 luxury condominiums, a 47,000-square-foot boutique office building and a parking garage with 850 spaces, Belmont Village will be completed in two years. The 120,000-square-foot building will have 149 units, and Will expects it to house 170 seniors in assisted living, with well over 100 employees. It will also have an underground connection to the Lincoln Common running beneath Fullerton.

According to the latest construction update, installation of the caissons is complete, and excavation continues this week.

Belmont Village has 26 locations in seven states and in Mexico City.